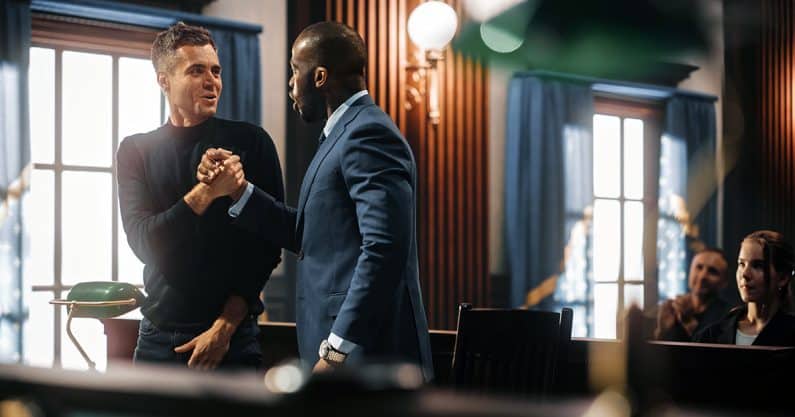 This guide to fathers’ rights and legal help explains many of the serious issues men face that could have a lifelong impact on their role as a father and on their children. If you are a divorcing dad, we urge you to seek expert help from an attorney early in the process.

Custody Page has a goal to provide men dealing with divorce with all the tools and resources they need. For men with children, one of the most powerful resources are experienced fathers’ rights attorneys. They can help with parenting matters, especially maintaining access to your children and potentially securing legal custody and joint physical custody.

What is a Fathers’ Rights Attorney?

A father’s rights attorney (or father’s rights lawyer) is a practicing family law attorney with special interest and experience in custody and child support issues that affect fathers and their children.

Family law attorneys often represent the parties in divorce proceedings. But, if you are a dad facing divorce, you need to know that not all family law lawyers are experienced in protecting fathers’ rights.

There are many different areas of practice for attorneys. Even within family law, you have different specializations, include divorce, property settlements, and parenting matters. Some lawyers also have expertise in certain aspects of criminal law, especially domestic violence and false allegations.

For the better part of the last two centuries, courts relied on the Tender Years Doctrine, a family law principle holding that children should remain in their mother’s care following a divorce as mothers were best equipped to meet the children’s needs.

The Tender Years Doctrine was found to be unconstitutional and discriminatory against the rights of fathers and other caretakers and was eventually phased out by all the states, some as late as the 1990’s.

While all family law courts strive to be “gender neutral”, the effects of the long-standing Tender Years Doctrine may still linger. The states and the public are still adjusting to new standards in family law proceedings.

The many myths about joint custody not working have been exposed. Reform of family law increasingly holds that joint custody, which means equal or similar parenting time for each parent, to be the presumptive ruling. Judges may be obliged to order a shared parenting arrangement unless strong evidence exists to show that such a decision would not be in the best interests of the child.

As seen below, the standards used today are not always well defined. That’s where a fathers’ rights attorney may be invaluable to your case. He or she could make the difference between remaining an active, connected father, or just the guy who pays the bills.

[While] there is no standard definition of “best interests of the child,” the term generally refers to the deliberation that courts undertake when deciding what type of services, actions, and orders will best serve a child, as well as who is best suited to take care of a child. ‘Best Interest’ decisions are generally made by considering a number of factors related to the child’s circumstances and the parent or caregiver’s circumstances.

childwelfare.gov, a branch of the US Department of Human Services

The following are the most frequently stated guiding principles:

Approximately 22 States and the District of Columbia list specific factors in their statutes for courts to consider in making decisions regarding the best interests of the child.

While the factors vary considerably from state to state, factors commonly include:

“Parental alienation” is the psychological manipulation of a child into showing unwarranted fear, disrespect or hostility towards a parent or other family members.

It is considered by many to be a distinctive form of psychological abuse and family violence, towards both the child and the rejected parent, that occurs almost exclusively in association with family separation or divorce.

For example, in the Matter of Robert Coull v. Pamela Rottman, No. 2014-01516, 2015 N.Y. App. Div. LEXIS 6611 (September 2, 2015), where the father was prevented from seeing his son by the child’s mother through a “pattern of alienation,” the court ruled to suspend the father’s obligation to pay child support. The case was battled through to the state Supreme Court for the final decision.

While some courts have tried to address the issue through mandated therapy to reunite the affected parent and child, currently there are no federal or state laws regulating parental alienation in the United States. As a result of mistrust of psychological expert witnesses, many courts now require professional accreditation and registration of any person invoking the term parental alienation.

Studies of child abuse allegations indicate that the overall rate of false accusation is under 10%. But when false accusations are made, a large majority occurred in the context of divorce. False accusations of sexual abuse are particularly malignant, and most often occur during child custody battles.

The courts will always seek to err on the side of protecting children from harm, and a man accused of abusing his child is at a disadvantage with respect to custody, co-parenting and parenting time.

An important study on the incidence of sexual abuse in divorce was done in 1990 by Thoennes and Tjaden of the Association of Family and Conciliation Courts Research Unit in Denver, with funding from the National Center on Child Abuse and Neglect. The information was gathered from eight jurisdictions during a six-month period each time there was an allegation of sexual abuse in a custody or visitation dispute.

More than 9,000 families had custody or visitation disputes, but less than 2%, or 180 families, had allegations of sexual abuse. While it is commonly believed that allegations of sexual abuse in divorce always come from the mother accusing the father, in this study, mothers accused biological fathers in only 48% of the cases, and accused stepfathers in 6 percent of cases. Fathers accused mothers, or mother’s new partner, in 16% percent of the cases, and accused third parties in another 6%. The rest of the accusations were made by third parties.

Half of the allegations of sexual abuse among the overall divorce dispute group were considered founded. In 17% of the cases, no determination could be made, however in 33% percent of cases, no abuse was believed to have occurred. That means during a six-month period in one state, 28 biological fathers involved in custody disputes were falsely accused of sexually abusing their child.

While false accusations against dads are statistically uncommon, if it happens, you will need the advice and representation of a strong and experienced father’s rights attorney.

If your child has been spirited away to another state or country by your ex-wife, you’ll need to take immediate action. Make sure it is the right action by consulting with skilled fathers’ rights attorneys.

Parental kidnapping occurs when one parent deprives the other of his or her legal right to custody or visitation by illegally taking the child out of the area. It is outlawed by the federal Parental Kidnapping Prevention Act (28 U.S.C.A. § 1738A [Supp. 1993]), which applies the Full Faith and Credit Clause of the U.S. Constitution to child-custody cases, meaning that each state must abide by custody decisions made by another state’s courts if the other state would be bound by those decisions.

The Parental Kidnapping Prevention Act often works together with state laws to facilitate the return of a child to the state with proper jurisdiction. Many of the custody provisions of the federal law are similar to corresponding state laws. Fathers’ rights attorneys know how the laws apply to your situation, and the right jurisdictions in which to file claims.

While the kidnapper parent can be extradited to face criminal charges, recovering the innocent child is a very complex legal process. They are generally best handled by fathers’ rights attorneys with specialized experience in international kidnapping.

Many U.S. states have adopted the Uniform Child Abduction Prevention Act (UCAPA), which offers protections to parents who are worried about the possibility of custody-related parental kidnapping.

If you already have a child custody order in place, or you have a custody hearing coming up, your father’s rights attorney will determine the need to file a petition under the UCAPA to address your specific concerns. When appropriate, this allows the judge to put limits on your ex’s ability to leave the country with your child.

While the Servicemembers Civil Relief Act (SCRA) does provide some divorce-related protections for military members called to active duty, servicemen who want to remain an active part of their children’s lives should seek competent legal advice.

Divorce and custody issues are more complex for military families, especially when the servicemember is relocated or deployed overseas. Multiple jurisdictions, the impact of foreign deployment on custody and child support, mandatory stays, and a host of other factors can influence a court’s decision about you and your kids. Father’s rights attorneys with track records of representing military men are able to best protect your legal interest and the best interest of your children.

Incarcerated men are stripped of many social and civil privileges after conviction, but if you have children, you are still a parent. In most circumstances, a father’s rights attorney can help you maintain contact with your child, prevent termination of parental rights, and negotiate reasonable child support obligations.

Don’t assume that your kid is better off without you.

A study published by the U.S. Department of Health and Human Services found that by the end of 2008, over 1.5 million individuals were incarcerated in Federal or State prisons in the United States, with hundreds of thousands more in local jails. The overwhelming majority of prisoners were male, and most had children under the age of 18.

The study compared the effect on kids with fathers in jail, to kids with fathers who are absent for other reasons. The research supports the findings that when dad is incarcerated, his children may act out more aggressively, and suggests “that children of incarcerated fathers are at significant risk for problems during early childhood.”

Fathers play an important role in the life of a child, even if dad is behind bars. Rutgers University is home to The National Resource Center on Children and Families of the Incarcerated, that offers updated and supportive information for incarcerated dads.

Don’t give up on yourself or your kids.

You are upset, maybe even blindsided by the divorce. Your kids are upset. You’ll do anything to protect your kids from more distress. The first thing you need to understand is that you must protect your children’s interests and your own.

You are not sparing the kids from heartache by agreeing to your wife’s demands, or waiting to see what happens.

Father’s Rights Attorneys practice family law with additional years of specialized experience representing men in custody and child support cases, experience that will protect your interests, and that of your children.

Fathers’ rights attorneys advocate on your behalf for court-ordered parameters that are fair to both parents for where the kids will live, custody/visitation exchanges, access to the children via phone or video calls, health care decisions, religious upbringing, grandparent visitation, and child support.

Your fathers’ rights lawyer will guide you through the process, so you know what’s coming.

And, your attorney will help you avoid pitfalls, and avoid mistakes that could cost you excess money, or worse yet, cost you your kids.

Don’t give up a future with your children, even if you are incarcerated or feel like the divorce was your fault. Contact a family law attorney who specializes in father’s rights to discuss your options for custody, visitation, and child support.

Note: This article is for educational purposes only.